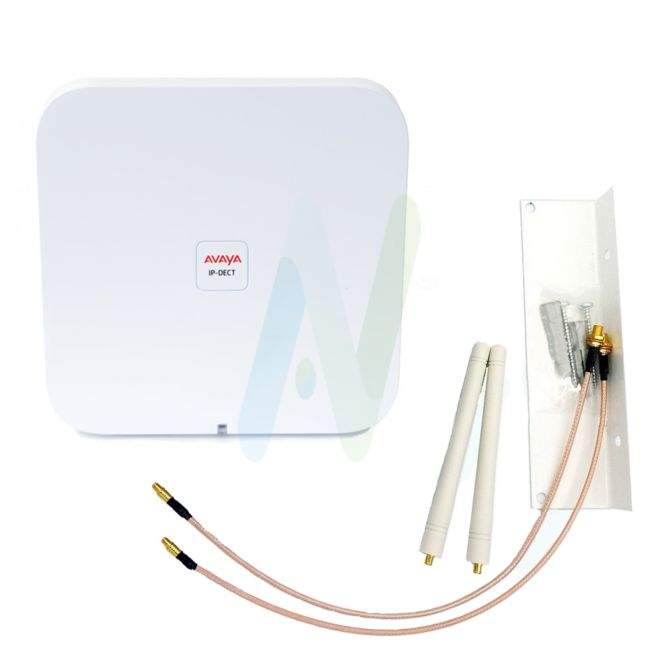 Be the first to review this product

The following external antennas are available

The Directional Dual Antenna consists of two flat directional antennas housed in a plastic shroud. It is fitted with a 1 meter long coaxial cable and a MCX male connector. The antenna includes a side tilt and a wall bracket by which it can be adjusted in a horizontal plane. The antenna can be mounted on a pole of 40 to 90 mm in diameter by using a steel strap (included).

The Directional Single Antenna is a flat directional antenna housed in a plastic shroud and fitted with a 1 meter long coaxial cable and a MCX male connector. The antenna includes a rotating bracket for wall installation. It can be adjusted in both a vertical and horizontal plane. The mounting bracket allows the installation on a pole of 30 to 60 mm in diameter. A steel strap (10-15 mm) is not included.

Below are listed Avaya DECT R4 base stations that are not longer available and end of sale by Avaya. All Avaya IPBS1 and IPBS2 base stations are fully interoperable with each other and can be used interchangeably.

Above Avaya DECT R4 base stations are replaced by the following new models. ( Since march 2021 )

Need our advise or help?

If you are not sure whether this Avaya IP DECT Base station is suitable for your Avaya IP DECT environment, please feel free to contact us.

We are a certified Avaya reseller and can provide you with professional advice and assistance with installing and, if necessary, upgrading your complete Avaya IP Office or Avaya Aura communication platform.

More Information
Reviews
Write Your Own Review
Product Questions (1)
Customer Questions
What is the distance range for a DECT Handset towards the DECT base station
The range distance you can use the DECT handset from its base depends on the enviroment. DECT Handset phones meet a maximum range of up to 50 meters indoors and up to a maximum of 300 meters outdoors. You will only get this range when there is a clear...
Read More
Did you find what you were looking for?
Product Attachments